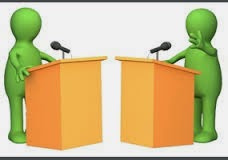 Introduction
This game is a great debate exercise for students at any age and stage of ability. It is designed to introduce students to ideas of problem identification and solving, argument construction and how to build a good first proposition case. It also helps to get them thinking about the world around them and tries to get them to engage with some big ideas.

It focuses on the idea that most debates are "change" debates, that means that most debates require students to argue in favour or against change a particular thing in the world, be it a law, or the behaviour of people, or the relations between governments or between states and citizens. The key aim is to get students to identify a big problem and proposed how they would fix and explain why they want to fix it.

Expansions
After you've done the above exercise with students, there are a number of ways that you expand it to use it in the future as students become more confident and skilled.
·         Ask other students to come up with reasons why a particular solution might not work or isn't a good idea. This gets them to think about rebuttal and engage with the arguments that they have just heard. It also encourages them to listen, which is a key skill in debating.
·         After they have finished playing the game, give them an actual motion (for example "this house would ban smoking") and get them to replay the game with banning smoking as the thing they would do if they ruled the world.